Where you were, who you were with and what you were doing. These are things often remembered when many describe how they got the news about the attacks carried out against the United States on Sept. 1, 2001.

On the 20th anniversary of the events that changed the nation and its people forever, the San Marcos Fire Department hosted the inaugural 9/11 Stair Climb event in remembrance of the first responders that sacrificed their lives to save others during the attacks.

“My idea was to, you know, throw a stair climb and try to bring all the guys in this area closer together, and what better way to do it than honor our fallen brothers and sisters,”  San Marcos firefighter Jacob Hanks said.

At the event, first responders climbed 110 flights of stairs at Rattler Stadium in full gear to represent the number of stair flights within the World Trade Center towers. 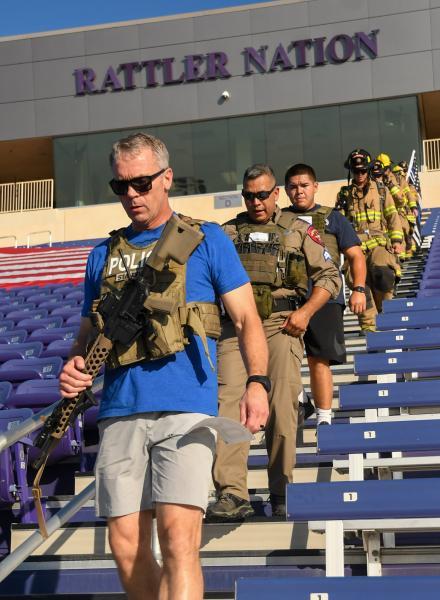 “The question that remains is, how do we show our respect for those service members, for those EMS, firemen and women and policemen?” said Maj. Anthony Williams, instructor of the JROTC program at San Marcos High School. “Twenty years later, we do not forget.”

The climb started at 8:46 a.m., the approximate time that the first hijacked plane hit the North Tower of the World Trade Center.

“Last night I got to be in the stadium and I heard the national anthem. I hear it every Friday night,” said John Walsh, San Marcos Consolidated ISD Athletic Director. “When the national anthem played today, it just felt different.”

Hanks recounted sitting in a science class at the age of 12 at Midland Christian School when the husband of his teacher entered the room with a TV and tears in his eyes explaining that New York was under attack.

“The rest of the day we watched in shock of what was happening around our country, the country was silent,” Hanks said.“As a 12-year-old boy, my friends and I immediately wanted to join the military and go help.”

During the climb, audio was played from a New York City dispatcher on the day of the attacks. Clips of the towers played during each timestamp of when the towers were struck.

“Here we are 20 years later, a brotherhood and a sisterhood remembering those who made the ultimate sacrifice on Sept. 11, 2001,” Hanks said. “Today we will honor them by completing the climb that they could not complete.”

Subscribe and see the e-Edition of the San Marcos Record for the complete story.

The latest weather for san marcos