The energy was just as you’d expect in a cross-county rivalry game, with jeers from opposing sidelines, student sections not allowing the other school to use the trash can on their side of the gym, and of course, four fiery sets of volleyball.

“It was fun because before COVID, this is how high school games are,” Te’o said. “So it was our first opportunity to see how (crowds) can get, and we need to, because Austin, Lake Travis and Westlake are very raucous crowds. So it’s a lot of fun and we need to get prepped for it because that’s how a lot of the matches this season are gonna go.”

A rivalry game doesn’t come without its surprises, and the visitors brought theirs. The Lady Hawks (8-24, 1-1 district) came out running a scheme they hadn't put on film to confuse the purple and white, and it ended up winning them the second set. Te’o admitted that the team’s game plan was thrown for a loop when Hays came out running the scheme. Set two highlighted what he feels the team can work on most moving forward.

“Mental focus (and) being able to sustain it for long periods of time,” Te’o said. “What’s so great about the preseason is we play a lot of matches, but they’re best out of three sets, and then you get into district and you’re playing best out of five. So I think we just are not used to that yet, and I think it will just come with time. I think we scouted really well, followed the game plan, but they made adjustments and we weren't really able to adjust. So mental focus and being able to stay that way through five sets is key.”

The good news for the Lady Rattlers is that their mistakes have nothing to do with talent. Senior outside hitter Maggie Walsh contributed 23 kills, while junior setter Ruby Gordon assisted her teammates on the court and on the stat sheet with 24 assists. Senior outside hitter Joselyn Roberson, who transferred from Hays over the summer, added 14 kills and was playing on the other side of the court just a year ago.

“They had a big student section and so did we,” Roberson said. “That’s the school that I came from so there was kind of a rivalry there between me and them. I think we just wanted to go in headstrong, you know, have that energy and it was hype all around, it was a really fun match for us.”

Before San Marcos (26-5, 2-0) travels to Austin Akins (9-13, 1-1) on Friday, Gordon and Roberson believe that working on execution, being more coachable, staying disciplined on defense and making their serves over the net will create a successful week of improvement. The Lady Rattlers will look to continue their momentum in district play at Akins on Sept. 17. 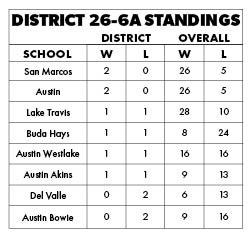 Subscribe and see the e-Edition of the San Marcos Record for the complete story.

The latest weather for san marcos